When turning long-chipping malleable materials, Citizen’s low frequency vibration (LFV) software fragments swarf into manageable chip sizes, whereas normally it would become a stringy bird’s nest entangled around the tool and component. The latest sliding-head bar auto on which the technology has been made available is the new Cincom A20-VIILFV, while it can also be found on one of the company’s Miyano fixed-head models.

All machines have been fundamentally redesigned with uprated ballscrews, lubrication system, guarding and other elements to provide additional strength for withstanding the oscillation caused by very short periods of intermittent air cutting that produce the chipbreaking action. Productivity is maximised by avoiding having to stop the machine repeatedly to remove clogged swarf, facilitating minimally attended operation and enabling lights-out running.

A further advantage is the avoidance of the need to fit a high pressure coolant system to encourage swarf breakage, which involves high capital investment and increased running costs.

Embedded in the operating system of the control system, the chipbreaking software synchronises axis servo drive motion with the spindle speed. The software version on the A20 is suitable for longitudinal and face turning as well as drilling and involves multiple oscillations per revolution of the main spindle. The function is highly controllable and can be programmed using G-codes to switch on and off during a cycle, as required.

This is distinct from the functionality being part of the program itself, as is the case with alternative CNC pecking macros, which have the disadvantage of rubbing the tool. It raises the temperature, causing workpiece distortion as well as built-up edge on the tool, shortening its life.

In contrast, LFV oscillation of the tool by tens of microns allows coolant to penetrate the cut more efficiently for the brief periods when the tip lifts clear of the component surface, reducing heat and actually prolonging cutter life, in some instances by as much as five-fold. For the same reason, depth of cut may be increased substantially even when processing tough materials, often eliminating the need for a roughing pass and significantly shortening cycle times. 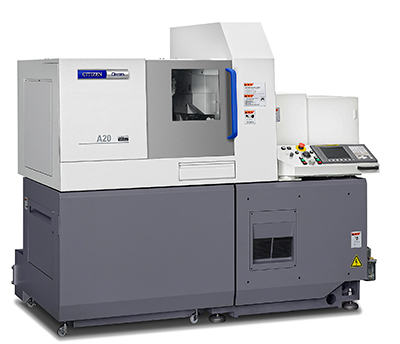 The Cincom A20-VIILFV can be used with a guide bush as a conventional Swiss-type automatic for machining shaft-type workpieces, or without a guide bush for producing shorter parts from less expensive stock with minimal bar remnant wastage. The guide bush can quickly and simply be mounted and removed. In sliding-head mode, machining length per chucking is a generous 200 mm to reduce cycle times when producing long, slender components.

The 7-axis A20 machine platform, which is capable of 2-axis simultaneous cutting, offers a high performance-to-price ratio for the production of parts from 20 mm diameter bar, optionally extendable to 25 mm (1 inch). The main spindle is rated at 3.7 kW / 10,000 rpm for optimal machining of smaller diameter stock and has an opposed 1.5 kW / 8,000 rpm sub-spindle with an X2-axis enabling simultaneous machining on the front and reverse ends of components. Both spindles have one-degree indexing and a 0.001-degree C axis.

Tool capacity is 21, with four driven stations for cross machining having a maximum speed of 6,000 rpm. The four back tool post stations may optionally be live. Positioning speed is fast at 32 m/min for short non-cutting times. Idle times can be reduced further using the pre-processing function in the Fanuc-based Cincom control dedicated to this machine model. It analyses the machining program before it is run to minimise processing and calculation times.